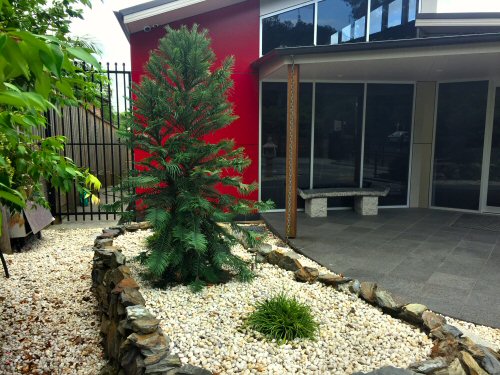 In September 1994 David Noble, a Wildlife Officer with the NSW National Parks and Wildlife Service, was bush walking and abseiling in the Wollemi National Park in the Blue Mountains near Blackheath (5). The National Park is named after the aboriginal word “Wollemi” meaning "look around you, keep your eyes open and watch out". David obviously was doing this when he noticed a gorge which contained a grove of very unusual trees. Having a good knowledge of botany he recognised that these trees were something different to anything he had seen before and decided to take a small fallen branch back with him for further study. What he had discovered was a new species to science which was subsequently named after him – the Wollemia nobilis.

Australia has a widespread fossil record of trees that are thought to be related to Wollemia because of their similarity to the trees found living today. Forty million years ago these trees were relatively common in Eastern Australia however their population declined and they were thought extinct until the discovery of the Wollemia nobilis relict population. The most recent fossil record of the genus are about two million years old and were discovered in Tasmania (3). The discovery created a great deal of public interest and media attention and it became known as the “living fossil”.

There are three populations of Wollemia nobilis growing wild in the Wollemi National Park however they only number about one hundred individuals in total. It can be difficult to count individual trees as they have multiple trunks and may share common root systems as well. Genetically they are indistinguishable from each other which indicates that the population of trees must have dropped to as few as one or two individuals thus losing all genetic diversity (4) . Over time the population gradually increased again to its current size from the original one or two surviving individuals. The oldest trees living today are estimated to be 500 to 1,000 years old with the largest specimen growing in the Blue Mountain gorge being 40 metres high with a 63cm diameter trunk (1).

The location of the Wollemi groves is being kept secret in an effort to prevent destruction of their habitat from too many curious visitors. This unfortunately has not stopped some unauthorised people from entering the sites who are believed to have introduced the fungus Phytophthora cinnamomi (2) . This is also known as “root rot” or “dieback”. This infection was discovered in some of the trees in 2005. It was most likely brought in on the boots of unauthorised visitors. This has put the surviving populations at great risk.

Dr. Cathy Offord of the Royal Botanical Gardens Sydney sums up the Wollemi as follows; "Having a Wollemi Pine in the garden allows everyone to help conserve this unique endangered species." (6)